Thanks to everyone who came out swinging at our Fourth Annual I-Rod Night Golf event on Friday, November 6, 2015. Despite some threatening skies, a week’s postponement (and a few determined mosquitos), it went amazingly well. Originally slated for the preceding Friday (Halloween Eve), it was rescheduled when the skies filled with angry clouds. We figured golfing in the dark is tough enough without doing it underwater, too.

Fast-forward a week and the grumpy clouds were still there, just hidden behind the darkness. And there was extra darkness this year, since Daylight Saving Time ended abruptly just after Halloween. Players had to scramble to finish the putting contest, which was in full swing as the sun slammed behind the horizon.

Everyone was treated to a fajita dinner before clambering into carts as night-time settled in. Armed with insect repellent, glow sticks and beer, throngs of dark-defying duffers swarmed into the night to chase little glowing balls. The rain held off, the beer held up and friends and customers of I-Rod wound up having a blast.

To everyone who couldn’t make it this year, don’t despair; we’re doing it again next October on the Friday before Halloween.

Click the image below to see a bunch of 2015 Night Golf photos. 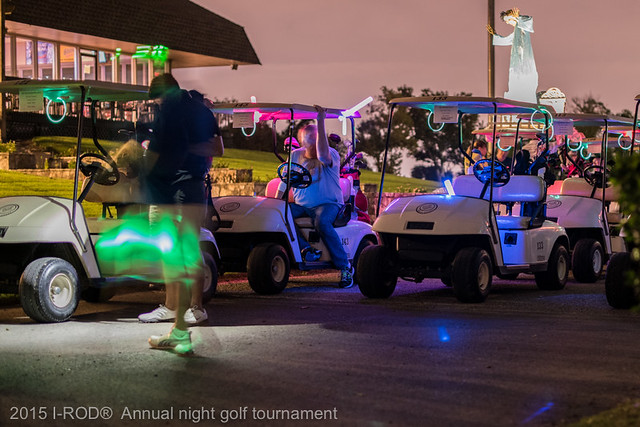