This paper was originally written for the Corrosion 89 conference, put on by NACE. It was subsequently published in Materials Performance in 1990. In 2005, Mr. Britton wrote an update to address the changes in corrosion control technology for deep water production equipment that had taken place in the interim.

Increasing interest in deep water offshore areas has presented a whole set of new unsolved problems to the corrosion industry. Several programs are in progress which are attempting to formulate revised cathodic protection design criteria for the deep ocean. The lack of historical data, combined with the increased criticality of accurate corrosion control design in these areas, serve to accentuate the need to be able to monitor the performance of the cathodic protection system once installed. The structural designs being considered for deep water production also present new problems which cannot always be addressed with standard monitoring methods and technologies. This paper will identify some of these problems and offer some generic solutions which should serve to increase the overall reliability of future deep water corrosion control systems.

In many cases it is not the actual water depth but rather the nature of the production hardware that determines optimum maintenance and inspection strategies. For example truly deepwater fields (> 1000 M) there are two basic options for hardware selection:

1. Use “wet trees” and send production back through flow lines to a host production facility (Floater or Fixed Platform).
2. Use “dry trees” produce from floater in relatively close proximity to wells.

In either event there will be one thing in common, ROV’s will be the main tool for the majority of corrosion related subsea inspection and monitoring tasks. Thus we must determine where they can best interface into the scheme.

If a floater, which could be anyone of a number of configurations, is used. There will normally be additional classing society regulated inspection requirements. These will include hull integrity monitoring requirements not found on fixed production systems. Part if this process, normally termed In-Service Inspection, is a periodic “UWILD” or Underwater Inspection In-Lieu of Dry-docking. It is these regulated inspections where most hull and mooring system CP monitoring is achieved. These inspections are normally performed with an ROV, even though they are largely in diver depth range. The reason for this being overall efficiency of using a machine rather than a person.

As with any other cathodic protection or corrosion monitoring application there are two general strategies, the most successful programs incorporate a combination of the two.

There are a host of pros and cons between the two methods [1]. But lets focus on the true strengths of each method.

Portable Monitoring
Can provide a comprehensive survey of CP status, at time of inspection, over a large percentage of the structure where access with a portable device is practical. This is the preferred method for the following applications:

Permanent Monitoring
Provides the ability to remotely monitor system status, on a time base, with absolute point repeatability. This adds a predictive value to the data allowing trends to be more meaningfully tracked. The monitoring exercise is largely de-skilled with permanent systems giving a generally higher level of data reliability. Human and/or instrument calibration errors are eliminated. Having set the stage a quick review chronology of key advances (and dead ends) in the Offshore CP Monitoring business would be as listed below. Many of these innovations are described in greater detail [2] [3].

Portable Surveys
Most of the instrumentation used for portable surveys is confined to the use of reference electrodes for potential or field gradient monitoring. The present systems used for ROV interface can be broadly divided into two types; Integrated and Self Contained.

An integrated instrument will send data to the surface as an analog or digital signal to be read on a surface instrument or logging system. This is the basis of most subsea pipeline inspection systems and much general purpose CP probes (Figure 1). 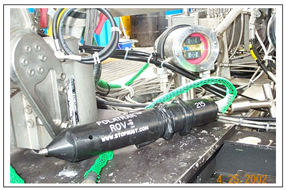 A self-contained system has no direct-wired interface with the ROV system, and merely uses the ROV as a transport and video eyeball for the system.

The choice between these two types of probe will hinge largely on the type of inspection required. If it is a limited number of point readings then the self-contained system provides a host of cost advantages. If a close interval type survey is required, a system with subsea digitizer is preferred with a topside logging computer.

The main requirement of either system is to ensure calibration accuracy at all times online. This is important as errors in these systems can develop in deep water over a period of time, and are not always easy to track. The best way to guard against this is to always use twin element probes on independent readouts (in essence deploying a fully redundant measurement system). Recent developments now allow point gradient measurement on self-contained systems. This technology can replace the need for complicated close interval surveys, and can significantly reduce cost.

The use of fixed sensors to monitor CP system performance is gaining momentum all the time, both onshore and offshore. The reason is mainly one of enhanced Oil Industry HSE pressure to improve the quality of asset integrity management, and being able to do so with no more money.

Offshore permanent monitoring systems have been around for a while, and have undergone continuous improvement. Sensors are now exceedingly robust and reliable (Figure 3, Figure 4) and options for interrogating them have increased now to two viable and reliable methods:

The combination of these two methods is the key to an optimized asset integrity program. 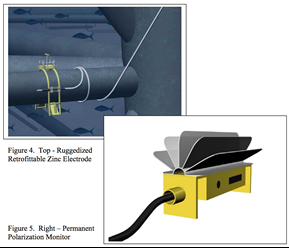 Hard Wire
The surface hard wired systems can be used in areas where getting the cables to the surface is relatively simple and inexpensive or where it is desirable to have on-line on demand access to CP performance data. Other areas where hard wire to surface is preferred are:

2. Where external subsea readout would require a hull penetration.
a. Seawater Ballast Tanks.

This means that these permanent sensors must be rugged and reliable. Do not use "cheap" or untested instruments. Use Combination instruments wherever possible to save on number of cables. Fig. 5.
Once in place a typical hard-wired system will pay for itself many times over in reduced offshore man-hours, shifting the task and man-hours to an onshore data management function.
This provides significant HSE benefit by eliminating un-necessary personnel exposure to the hazards of an offshore production facility.

Introduction
The evolution of this device from within the authors company was a natural progression. When a company works closely with the Deepwater ROV industry two things become apparent:

1. There’s no ambient light in deep water.
2. Without a video-camera you are blind and of zero worth.

So all ROV’s by definition have lights and cameras (Figure 5). Hence the original idea of using a light activated power-up for ROV instruments. This was very successful, and is still in use, extending battery life in the portable instruments to better than 6 months without charge or replacement. 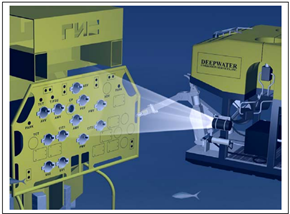 All ROV's have lights and cameras

Substituting the photo-sensors for solar panels, taking the readout off the vehicle and putting it onto the equipment was a natural progression. This opened the door by eliminating the need for subsea batteries, so now a visual voltage readout powered on demand makes sense and can be designed for a 20 yr plus life. Now we can go to permanent monitors and reap all the advantages of simple repeatability and wire these monitors subsea to the readout. It became clear that this was a superior solution for routine ROV monitoring during UWILD or other routine intervention tasks.

The light-powered readouts should be located at points where ROV intervention is expected to be regular. Thus advantage can be taken of this visitation and a FREE inspection secured on the recorded record of the intervention. Some such points would be:

The solar readout contains all information pertinent to the location of the sensors and the specifics of the value displayed. This information is contained on a simple bezel around the display (Figure 6). The ROV Video Overlay will impose other relevant information such as time and date, water depth and a verification of location often with XY coordinates. 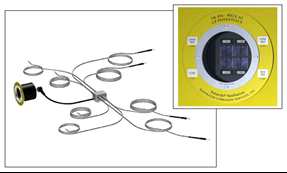 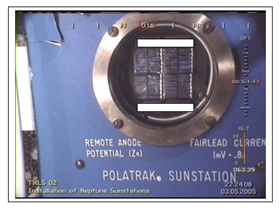 The subsea image recorded on the DVD provides a complete record of the inspection event with no additional data recording required.

Because we are using a self contained voltage readout we can achieve high resolution, and can accept data from any of the ruggedized sensors that are already available and well proven in service (Figure 9, Figure 10). 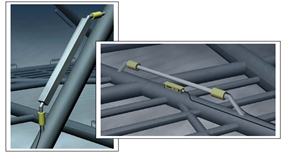 Monitored anodes can be output to solar readout.

Dual element reference electrodes can be output to solar readout.

The Future of Cathodic Protection in Deep Water

Here we go into the unknown. However the author’s prediction of where the state of the art will move in the next decade is as follows, (based on the leading edge applications currently being deployed in the deep water Gulf of Mexico.)

1. More use of impressed current to protect floating production hulls and mooring terminations. As the structures become larger and more complex, the cost and weight saving advantages of ICCP will ultimately win through.

2. Use of dedicated smart anode structures Fig. 10. Fig 11.to protect multiple subsea elements. The subsea displays will be the status indicators and will deskill CP management to a routine meter reading task. This is the most efficient way to use and manage sacrificial anode systems in deep water.

3. Move toward permanent monitoring rather than portable. This will be accompanied by routine use of satellite data transmission to allow global access to records, and to facilitate automatic internet based regulatory reporting. This will mirror other asset integrity management initiatives geared toward developing event-based rather than interval-based programs. 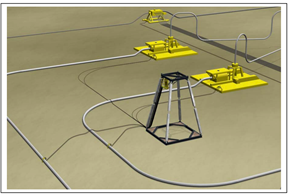 One ROV Can Read the Entire System Status from Display Panel 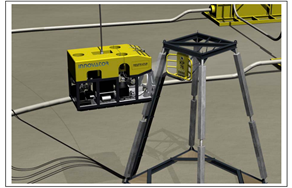